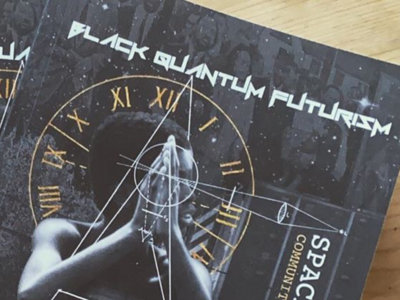 Space-Time Collapse is an experimental writing and art/activist series in which Black Quantum Futurism-- as both a praxis and a movement-- imagines future(s) and recovers past(s), using experimental writing, cosmic visions, and exploratory images in Black speculative practices. Space-Time Collapse Part II considers time, memory, and temporality as experienced by people of the African diaspora over time and across space, while exploring how these communities create and enact alternative cultural, communal, and personal temporal-spatial frameworks.

Contributions from local writers and activists revive the historical memory and quantum histories and detail some of the spatial-temporal interventions and memory preservation projects happening in the neighborhood. Submissions by non-local writers and artists reflect on how the experiences of the North Philadelphia community are not unique; the affordable housing crisis, gentrification, and spatial-temporal displacement of Black and poor people are all happening in similarly-situated communities throughout the Afro-diaspora. Thus, their contributions will explore Afrofuturistic, Black speculative, and Black quantum tools for addressing these issues, speaking into existence both ancient and new visions for deconstructing old problems.

*Proceeds from sale of the book are used to build and maintain a community archive and website of the project, and to support other community-based projects in North Philly.